"We lost over 50% of our retirement fund in the last 3 years". I hear that a lot these days however some people are getting creative to achieve their Custom Wood Home dreams on the budget that is left. Priorities change when we are faced with harsh realities. By focusing on what is really important and being creative on the rest you can have something really nice and afford it too! A few things you can do to have a really cool custom wood home and save some dough- 1- Use Quarter log wood siding instead of actual logs 2- Don't Build - Remodel! 3- Pre-Manufactured structure + wood siding 4- "Trimber-Frame" it! 5- Buy cheaper land 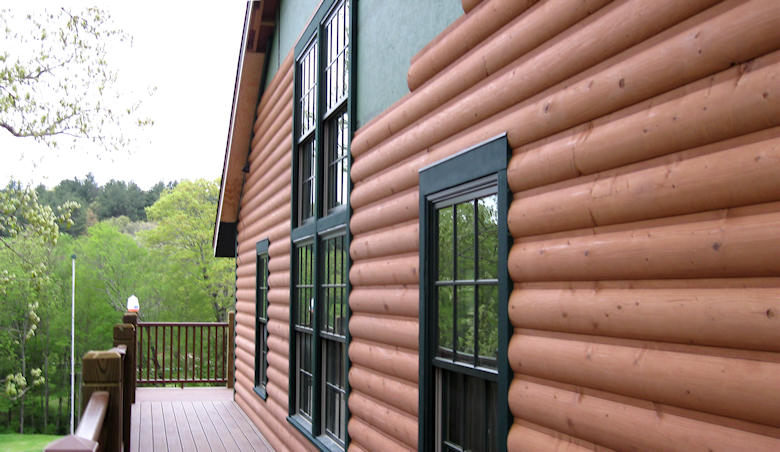 Log siding is a great way to achieve the look of harmony with nature you want and save thousands of dollars in the process. Log siding on a stick built (traditional framing) home will cost you 30 to 50% less than actual log construction. This is a boy's camp in New York. They had a 5400sq ft complex and there was no way they could afford to do this in actual log construction. By using a stick frame construction with a factory finished 2x8" log siding package they were able to achieve their goals on a budget the community could afford. 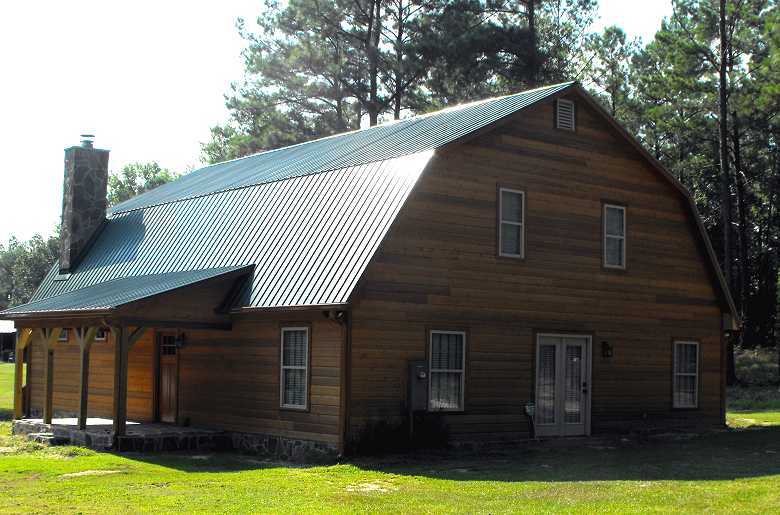 This gentleman was looking to build his retirement property and was thinking of building a new home on his land. He had a large sturdy horse barn with a 2 bedroom apartment above it on the property and decided to remodel that instead of building new. The projected cost of building a new log cabin on his property was in excess of $350,000. Originally he wanted Log Siding on his house but after talking it over he decided that a less expensive 1x8" Dutch Lap wood siding pattern on the exterior was fine. He preferred to spend the saving on the specialty finished pine interior. 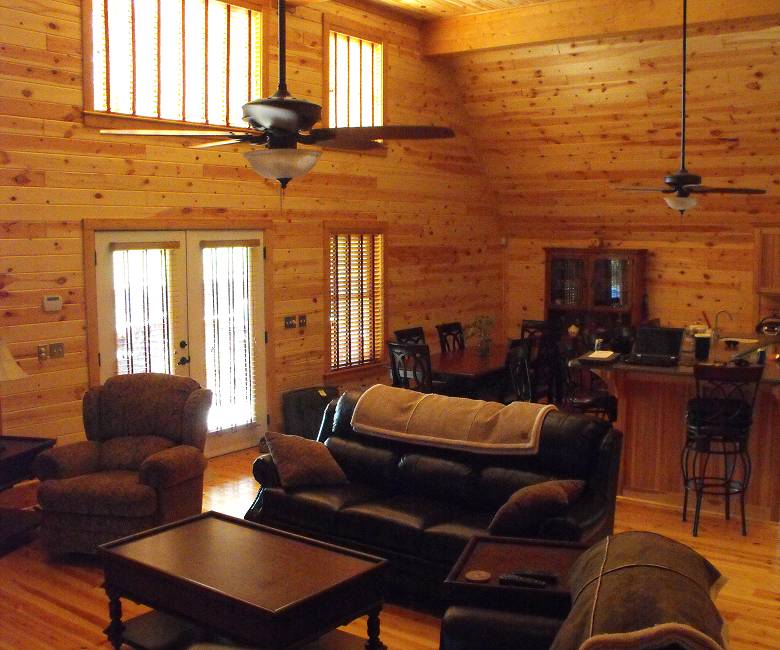 His thinking was that he would spend the majority of his time on the inside of the cabin and that the "feeling" created there was most important to him. After being inside his dream home, I could not agree more. He told me that he went over budget on the build to get the finished pine but was able to afford it because of the overall project savings of remodeling instead of building new. The total cost of the remodel was $175,000. The cost of his pre-finished wood siding and interior paneling package was around $13,000. The look of pride he has when standing in the middle of this beautiful place says it all. To him it was well worth a priority shift to realize his dream. By remodeling an existing structure he was able to spend a little more customizing the interior which to him was the most important thing. He changed his priorities and still got what he wanted most - a custom dream wood home - for 1/2 the budget!

I have had many people in the last few months telling me about how they changed their priorities and saved serious dough. Several did the same thing- bought a pre manufactured home and had it placed on their land and then covered the exterior with wood siding and the interior with wood paneling. This wood lover used metal framing and built a 12,000sqft mansion in Florida for under $270,000 (the log siding and paneling package was $20,000-ish). 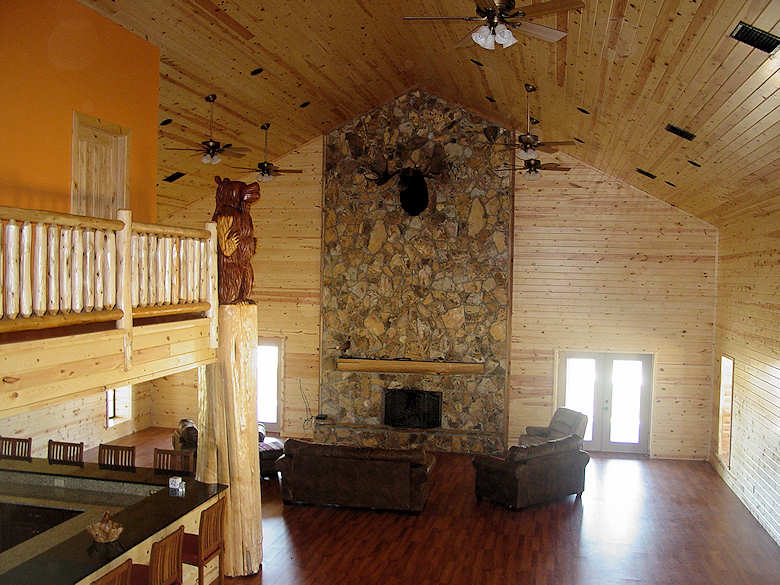 The cool thing about metal framing is the fact that no support beams are needed. You can have wide open spaces. (I would build a basketball court in my basement). Any of you retirement home shoppers out there care to speculate what a 12,000 SQFT under roof stick framed full log constructed home in Florida might cost? North of a million? More? What might you do with an extra $730,000? His "cabin" looks pretty livable to me when I consider all the ways I could spend nearly 3 quarters of a million dollars. There are a number of attractive features of pre-fabricated homes including reduced costs and time involved. We had a TV personality contact us because he wanted to have a fishing cabin on his recently purchased lake property by the winter (within 2 months of the time we were talking). He bought a log siding and interior paneling package from us and by the time it was delivered the house was in place. From concept to delivery, those guys got it done in 6 weeks. Pretty amazing and our star was gleefully fishing in his beautiful cabin by winter. 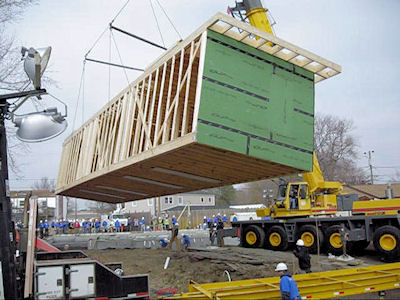 These pre-fabricated homes designs and technology are really improving. We did an Extreme Makeover Home Edition and I personally witnessed them putting a 2 story, 4000sqft pre-fabricated home in place - finished inside and out - in less than a week. It went on a concrete foundation and was solid as a rock when finished. There is no limit to the size or scope of a prefabricated construction so I would not pre-judge this as low end; I see it as an extremely viable option in today's marketplace on any level. 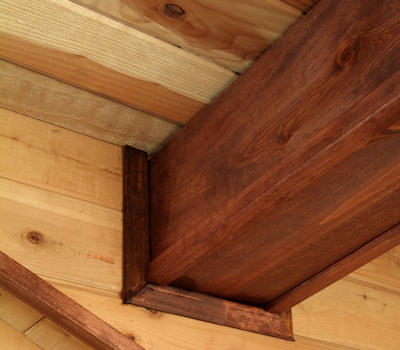 I heard that phrase from a Timber Frame dealer referring to stick built homes with large timbers made to look like timber frames at a fraction of the cost. I immediately thought "what a great idea!" Timber Frame homes are really expensive. Wrapping beams with 1x boards is less expensive. You buy a few big timbers for the exterior etc and you can get really creative "wrapping beams" with 1x8", 10" and 12 inch to look like timbers on the inside over Glue laminated beams. Again we are talking 30% to 50% savings over all. That can make you look at things differently.

"We lost over 50% of our retirement fund in the last 3 years." This customer had to re-evaluate his entire situation in order to achieve his wood dream. He was originally planning to build a log cabin or timber frame retirement home for $350,000 - $400,000 including land. After losing 1/2 of his retirement, he thought about abandoning his dream home. He had been picturing himself surrounded by wood on a little piece of land by a lake. He had been looking forward to it for years and found himself having trouble letting go. He began to look for property in other parts of the country. He abandoned the idea of a traditional log or timber frame and started looking at pre-manufactured homes. It took a little longer than he planned but he was able to find his dream property on a lakefront for $39,000 in Alabama. By moving to a different part of the country and being willing to live an hour away from the nearest town he was able to find something he could afford. Next he had his pre-manufactured home placed on the property for around $40,000 and bought a log siding and interior paneling package for about $10,000. By taking his time and being willing to accept a couple of things that might be considered undesirable to others he was able to get the same amount of property and the same square footage as his original retirement house plan. From $300,000 to $89,000 and he got everything he wanted. I have had the privilege of talking to thousands of people in every stage of building their dream projects. They are stories of heartache, triumph and overcoming obstacles in order to get what they want. In the face of major change, a few perception adjustments can make the dream possible again. The question is "What are your real priorities and are you willing to adjust in order to live the dream again?" The rest is just finding clever ways to do it. Here's to those of us still fighting for our dreams. 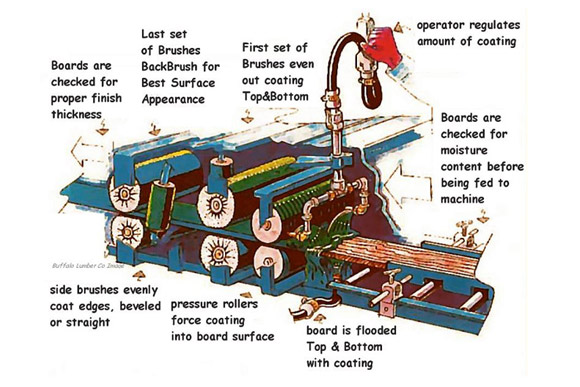 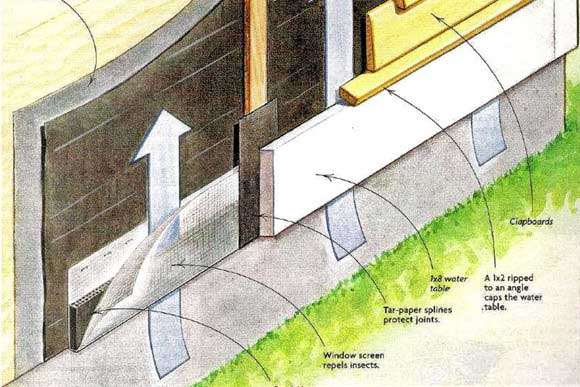 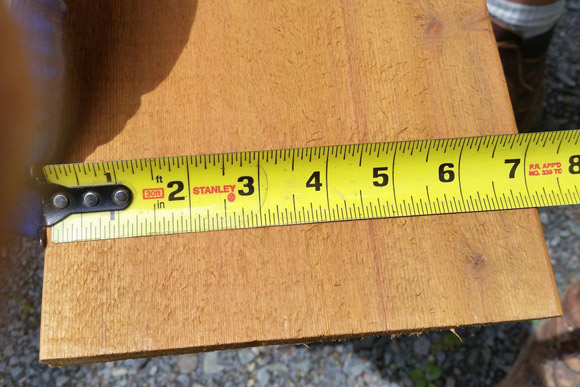 DON'T RUN SHORT! Wood siding is often sold by the linear (or...